On the 20st of July, 1969, mankind step onto the moon for the first time in the human history. This year marks the 50th anniversary of the historical moment. This month I’m going to share not just one but two spece-tacular picture books to celebrate this special month!

The first one is This Is the Way to the Moon by Miroslav Šašek (Universe Publishing 2009). If you love picture books, Šašek’s name must be familiar to you. He’s the author-illustrator of classic children’s ‘travel guides’, This Is… series. This Is the Way to the Moon follows the similar format. It takes you to “a land of giants, of science-fiction-turned-fact”, “Space Capital of the World” – Cape Canaveral on the east cost of Florida. Cape Canaveral is “the land of satellites, space vehicles and spacemen” where “the effective speed limit is 17,400 m.p.h.”. To be more specific, it’s where John F. Kennedy Space Center is. 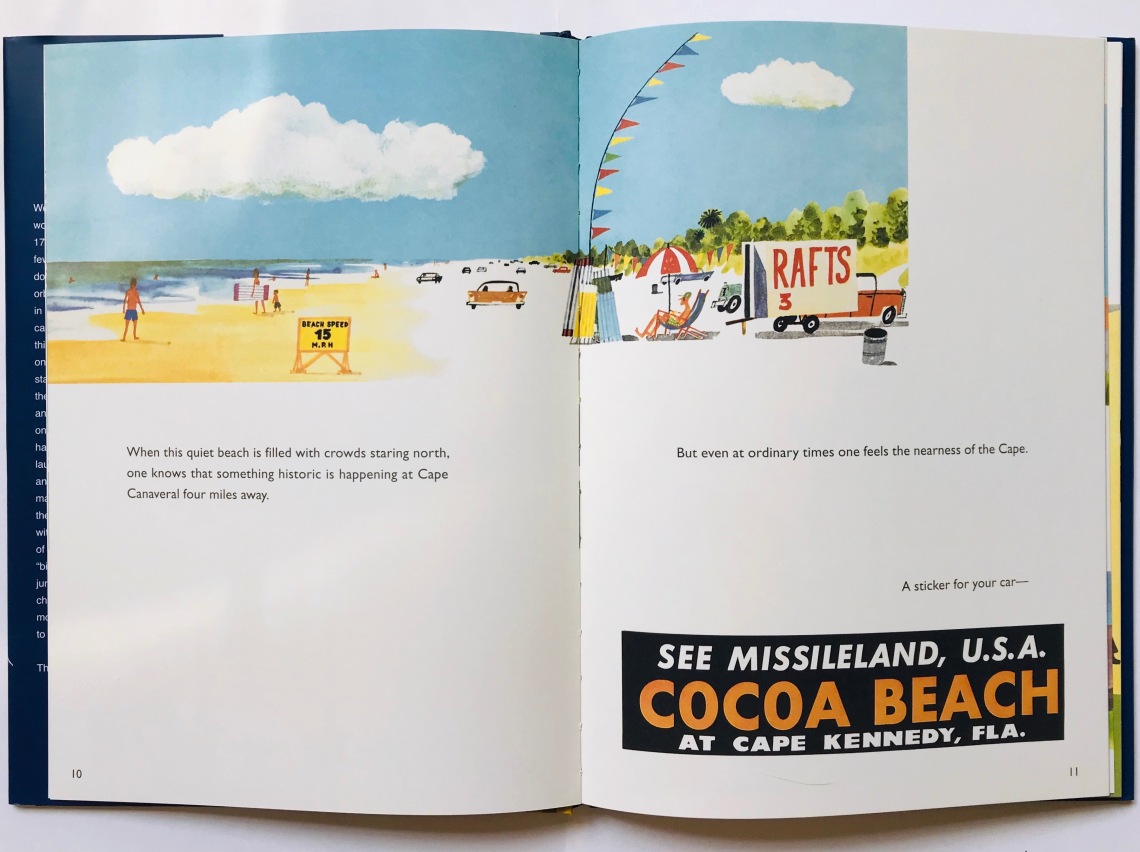 Like all other This Is… books, this is not a typical reference picture books filled only with dry facts and numbers. Yes Šašek gives you facts and numbers about different missiles and radars. But the heart of the book is the relationship between the space centre and the city and people who visit and live and work there, and it’s told with warmth and humour, featuring the 37-pound astronaut, “birdwatchers” and a chocolate spacecraft!

In my opinion, Šašek’s artwork is one of those that age well. It’s retro and nostalgic but it never dates – just like our fascination for space. I also love the layout of the book. It’s arranged the way that reminds me of someone’s holiday photo album. And by looking at the beautiful colours of the artwork, blue and yellow in particular, you can almost feel the hot west coast air. 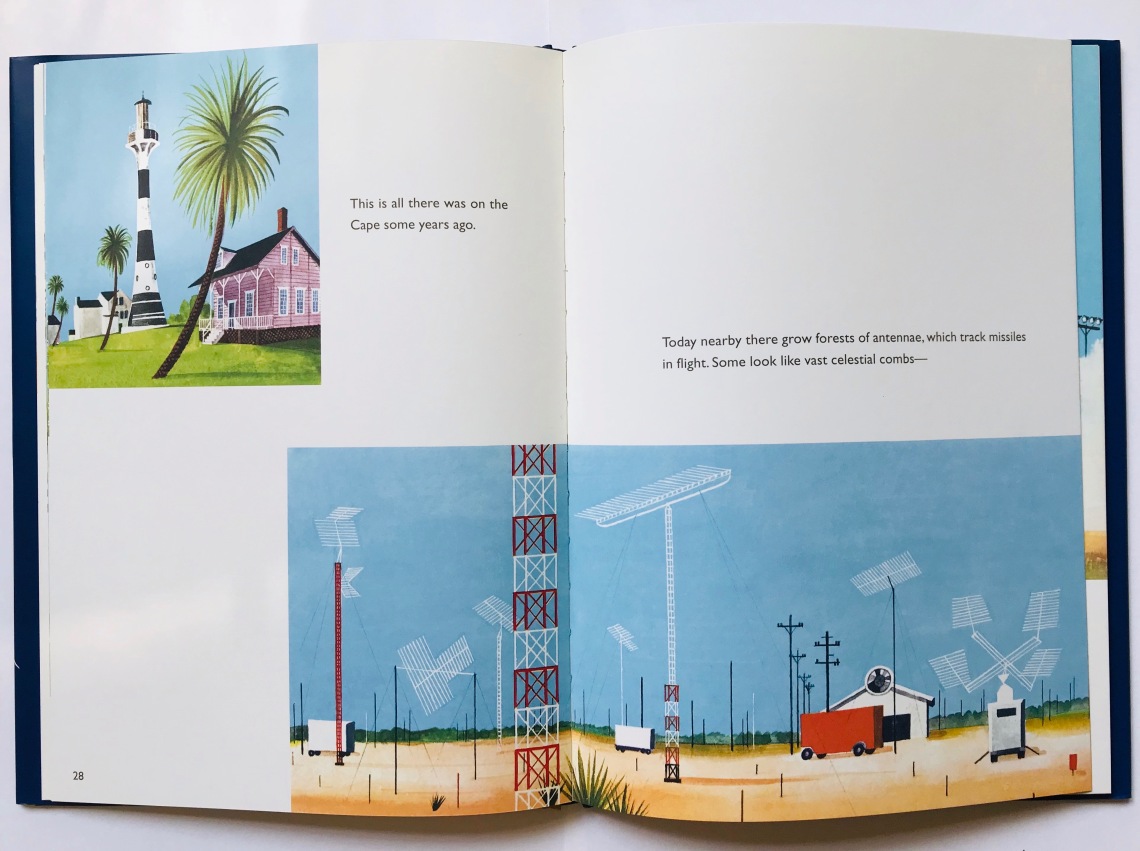 Actually, this book was originally published as This is Cape Canaveral in 1963, then as This is Cape Kennedy in 1964, before Neil Armstrong and Co. landed on the moon. The book tells you what happens on a Project Mercury and the first American spaceman, Alan Shepard. But this new edition is updated with Apollo 11 moon landing facts (illustrated by Jessie Harland). 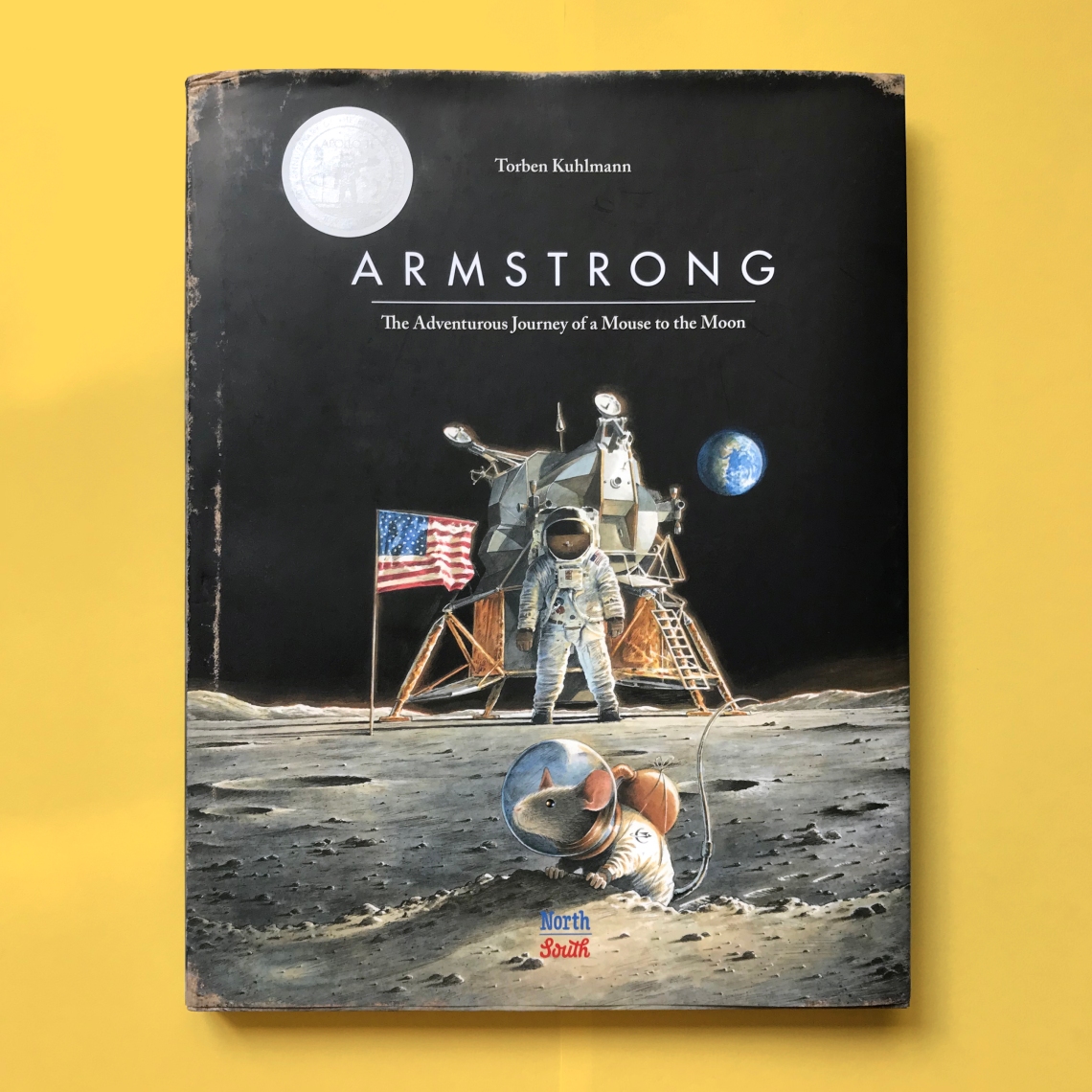 The second book is Armstrong: The Adventurous Journey of a Mouse to the Moon by Torben Kuhlmann (NorthSouth 2019). This is one of those books I had never heard of before and just stubbled across in a book shop and fell in love. When you see a mouse in spacesuit, you got to pick up the book, right? I was hooked as soon as I opened the book and  saw the endpaper with pencil drawings of inventions by the mouse. Then I saw the first spread of the little mouse looking into a human-size telescope. WOW. 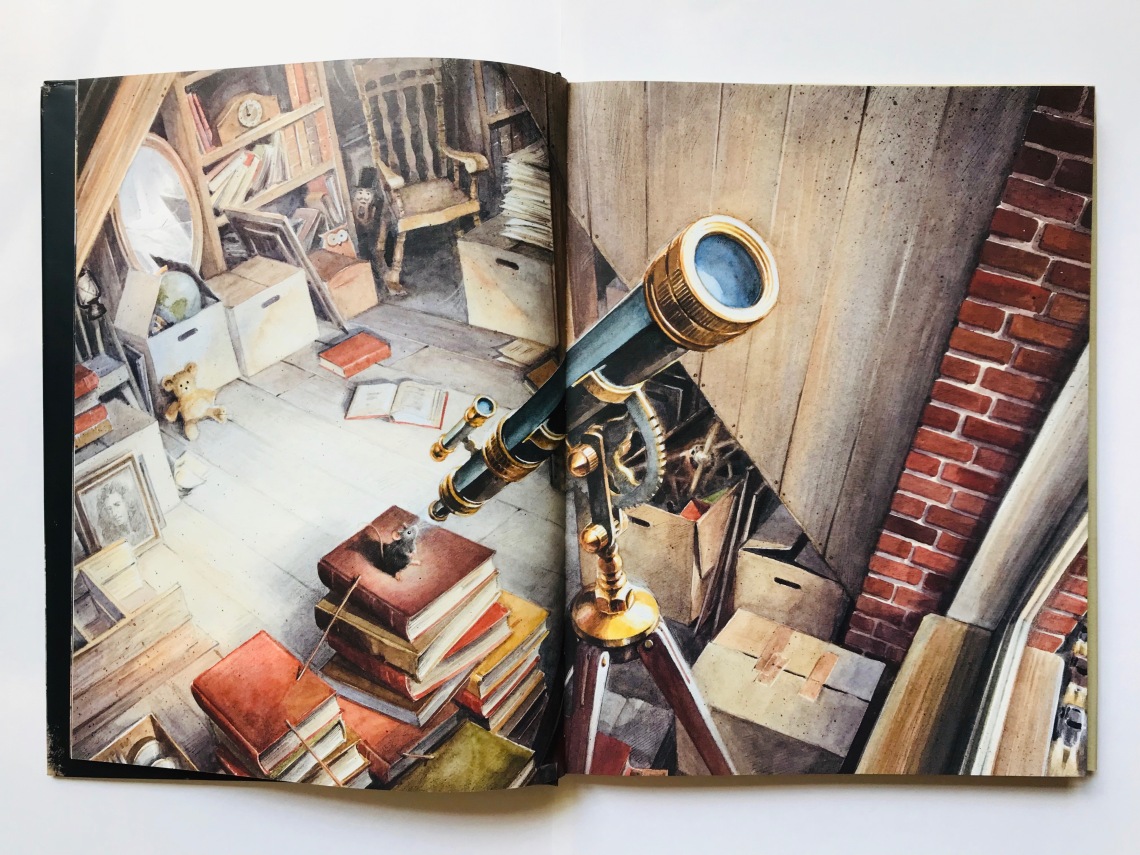 The story is about the stargazer – a curious mouse who is obsessed with the moon. He observes the moon night after night. One day he decided to share his discovery with his fellow mice. But no one is interested because they don’t want to know the moon is a giant ball of stone. They believed something quite different…

To prove his discovery, the little mouse decided to be the first mouse on the moon. However, soon he learns that going to the moon is lot more complicated than he thought (he slipped into human libraries and university lectures). But it doesn’t stop him. He overcomes many obstacles by trial and error. 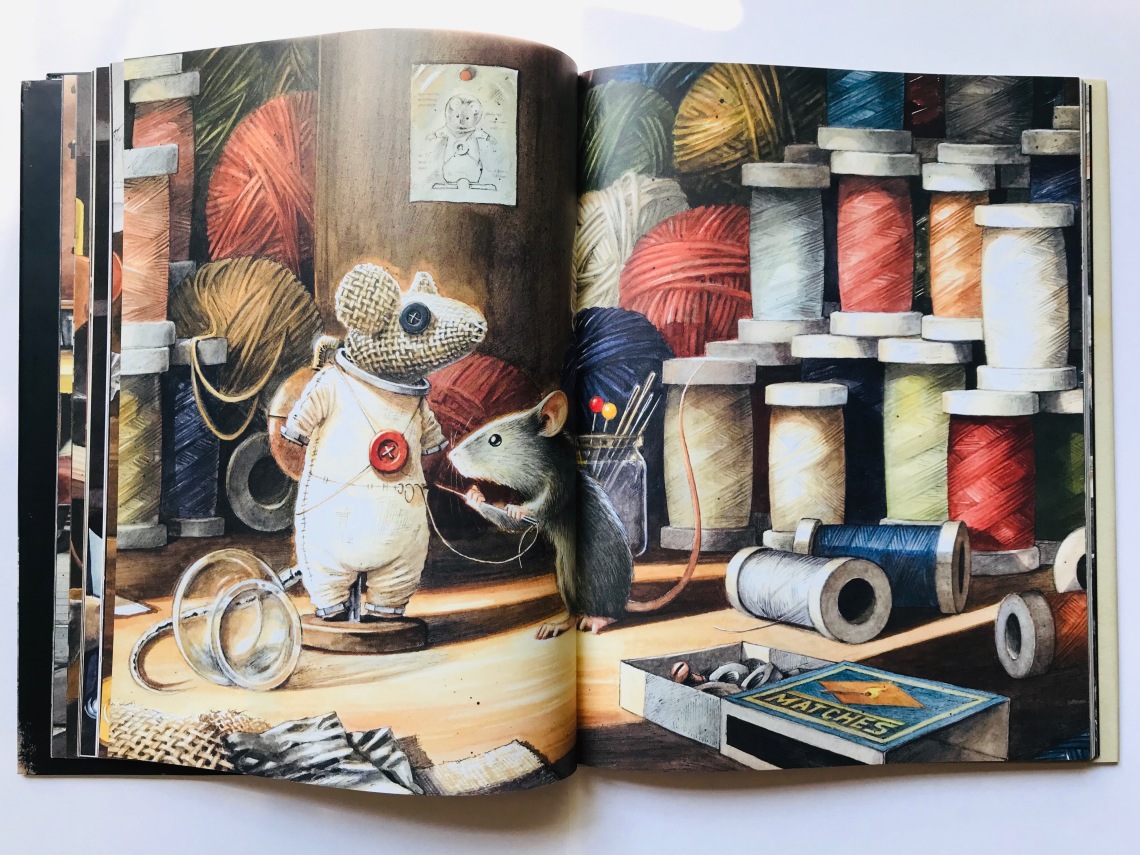 However, his experiment leads to a catastrophe and now humans are after him (“THE RODENT SABOTEUR”)! 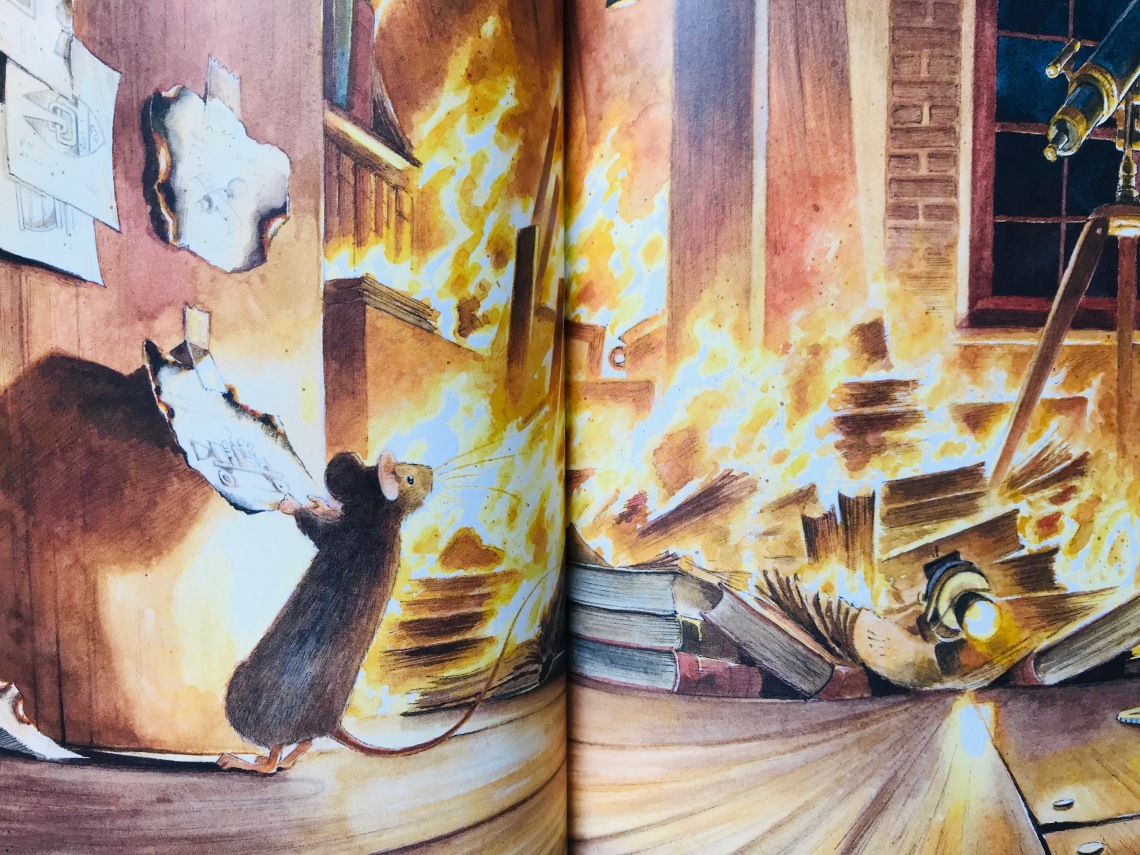 But our little dreamer never gives up. And one day his dream comes true. He picks up a stone as an evidence to show the other mice. His mission is a complete success. And when he comes back to Planet Earth, he is welcomed by a big crowd of fellow mice as a hero! 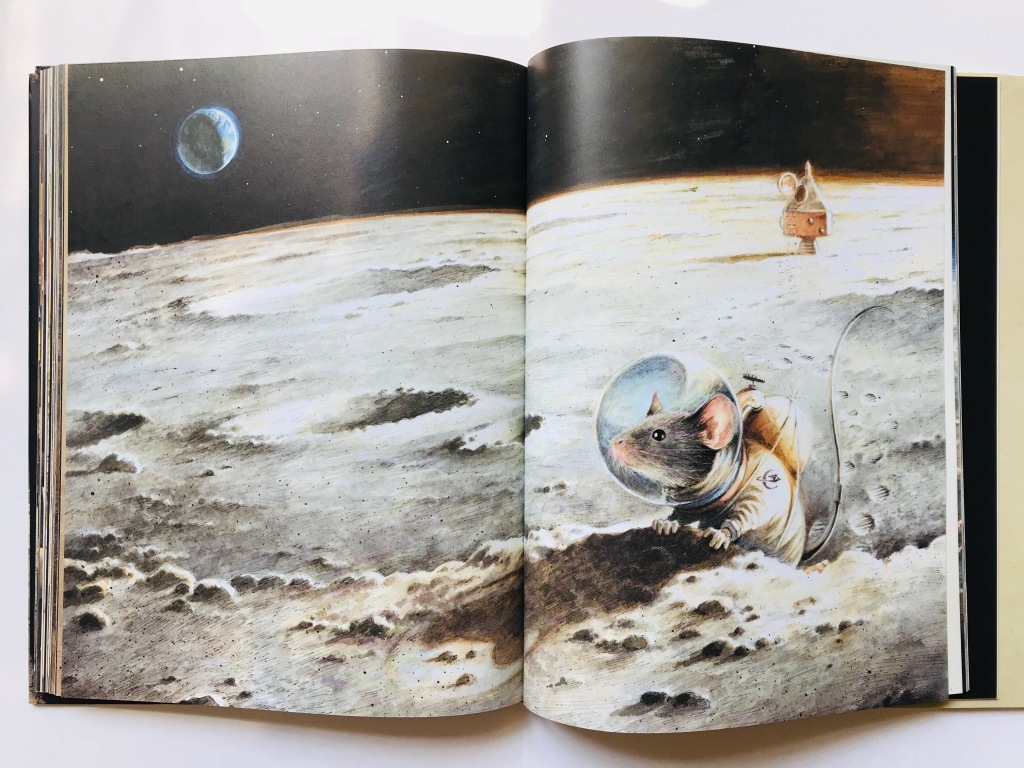 This is an epic story that runs over 128 pages (what I just told you is just a digest). The book is more of a graphic nobel than a picture book. What makes this book so special is the stunning illustrations by Torben Kuhlmann. The details and cinematic compositions make every spreads look like a piece of art. Kuhlmann also has great skill to mix realism and fantasy. The star of the story, for example, looks pretty realistic but it has just right amount of human qualities, and Kuhlmann can demonstrate range of emotions through slight change of posture and angle of ears. You can’t help relating to this little hero.

The synopsis on the cover reads “dreams are determined only by the size of one’s imagination and the biggest innovators are the smallest of all”. This fantastic story is not just about power of curiosity and determination but also it is itself a fantastic example of great imagination. This is a sort of re-imagined history of moon landing. You would like the witty little twist at the end.