As the Father’s Day is around the corner (in UK), this month’s pick is a picture book filled with love of dads and appreciation for them. It’s My Dad Used to Be So Cool by Keith Negley (Flying Eye Books).

It’s so hard, even for adults, to imagine parents before they were a dad or a mum (my aunt once told me about my mum’s dramatic love affair before she met my dad and I can’t still believe it). My Dad Used to Be captures the enigma perfectly in a sweet and poignant way. It centres around a single dad and his son. The son just can’t believe his dad’s cool, punk rock past as his dad seems so normal.

The graphically sophisticated book uses a simple yet smart format. A spread illustrating the now-dad is followed by a spread showing the past-dad. Those two versions of the dad are in exactly same posture in the paired spreads. The similarity highlights the differences. Negley also beautifully captures the dad’s vulnerable and loving moments in those spreads. 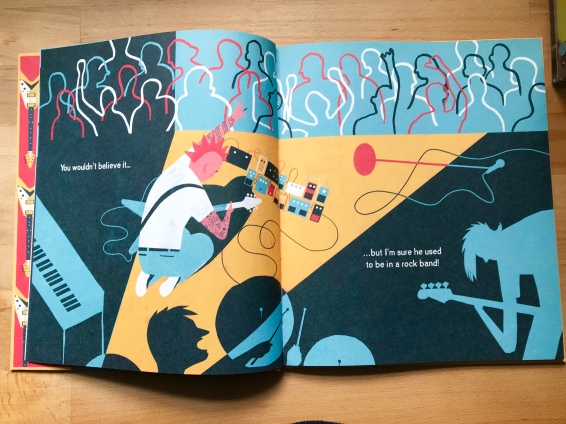 Unable to believe that his dad used to be cool, the son questions himself: “So what made him stop (being cool)?” What made him give up his mohawk and motorcycle? The book doesn’t tell you but show you the answer, and it makes the revelation more poignant.

This is a ‘picture speaks a thousand words’ kind of book. Words are minimal but Keith Negley’s simple yet cleverly designed spreads are filled with clues that tells lots about the dad. Negley’s bold and limited colour palette are balanced with subtle use of texture that makes his artwork super cool than overly textured illustrations. Also, his editorial and book/album cover illustration background is evident throughout the book. Each spread is beautifully composed and it’s something I would be happy to frame and put on a wall.

I was introduced to Negley’s work at my first Bologna Children’s Book Fair. Flying Eye Books’ co-founder Alex Spiro showed me My Dad Used to Be along with equally brilliant Tough Guys Have Feelings Too (also by Negley) to give me some art directions. It was for me a artistically breakthrough moment and Keith’s work has been my big inspiration ever since.

This book is unique because 1) it feature a single father, and 2) it re-defines the meaning of masculinity and what it means to be cool. It presents the dad not as a strong, brave superhero but as someone real and vulnerable. This book offers an opportunity to tell kids that dads are just a human but they do whatever to make their loved ones feel happy and safe and that’s as cool as flying in a cape. This is a perfect book to read with your dad on the Father’s Day.