You know it’s autumn when red and orange leaves begin to pile up on the ground. Autumn is such an unique season, sandwiched by carefree summer and festive winter. It’s also different from the cheerful spring. Autumn somehow makes you to slow down and contemplate.

October in particular for me it’s a time to reflect the past and set a new resolution as it’s my birthday month. Looking back, I realised that I had developed a tendency to say “I’m fine” when I’m not, and I ended up letting the negative feelings pile up inside me until they explode. I’m sure this tendency is familiar to many kids and adults alike.

Also the 10th October is World Mental Health Day. Mental health is a topic very close to my heart. To celebrate and support the opportunity to raise awareness of mental health issues, as this month’s book, I picked a philosophical and uplifting story about confronting big emotions from the author of The Night Box, Louise Greig, stunningly illustrated by Júlia Sardà – Sweep (Egmont 2018). 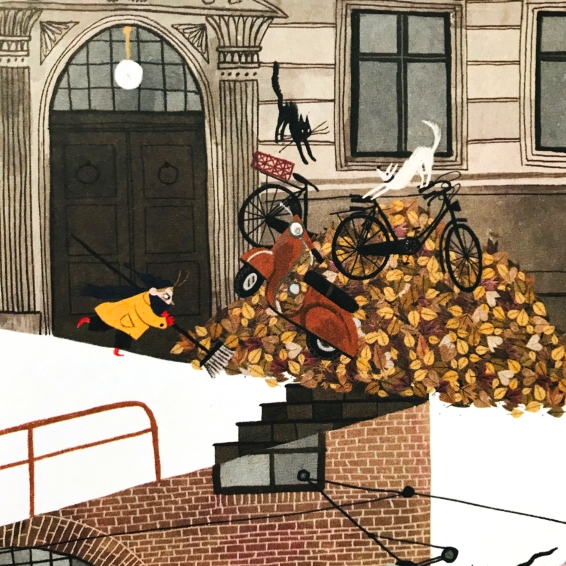 The story starts with a boy called Ed who is in a bad mood. Ed’s bad mood begins as something really small, hardly a thing at all. So Ed just tries to sweep it away.

There are many wonderful things happening above the ground but Ed can’t lift his eyes because he’s too busy focusing on his bad mood.

Before long, his bad mood grows, gathers pace, and spreads through the whole town as Ed gets caught up in the act.

Will the bad mood has its way? Luckily, there comes a change of wind. It has even blown something Ed’s way. Something that makes him look up.

Louise Greig is a Scottish award-winning poet and a children’s picture book author with a unique, lyrical voice. Sweep is not just beautifully written but also it has Lemony Snicket-esque quirkiness to it; for example, the bad moon is treated like a character.

Just Ed and his bad mood. Is this really worth it? he asked himself. Yes, his bad mood decided, though Ed did wonder a little.

Also, the story has very Buddhist-like message – nothing is permanent. Sometime it feels like bad things would last forever but it won’t. It’s a very comforting thought.

Spanish illustrator Júlia Sardà is definitely one of the brightest new stars in the children’s illustration world. I’ve been a big fan of her work ever since I saw her debut picture book, The Liszts (Andersen 2016).

Her signature mute colour palette and whimsical illustration create beautifully autumnal setting for the Greig’s text. I like her unique interpretation of “this mood swept over him”. In fact, there’s no mention of Ed’s sweeping or leaves or even the season in the text at all, but together it makes a complete sense. And I really like the way Sarda took the sweeping metaphor to a wonderfully surreal level. By doing so, she perfectly illustrated how bottling up negative feelings feels like and how it affects the surroundings.

The message of the story is very simple – remember to look up before big emotions like Ed’s bad mood get too big and swallow you down. I know it’s easier said than done, but don’t worry. This book is here to remind us.