I’d like to talk about death this month. This 13th of March marks the 20th year since I lost my dad. The length of time never reduces how much I miss him. It was sudden. I didn’t even have time to say goodbye. The hardest bit of all was accepting the loss. I was 16 so I understood the concept of death intellectually, but understanding and accepting are two separate things. I didn’t cry for months, not even at his funeral. I refused to accept his death for a while because I couldn’t get it; why a good person like my dad had to die so young?

If the notion of death is hard for adults to accept, despite intellectually recognizing it as a necessary and inevitable part of life, imagine how hard for children. The good thing is there are some wonderful picture books about death and grieving, such as Duck, Death and the Tulip by Wolf Erlbruch, The Heart and the Bottle by Oliver Jeffers and Grandad’s Island by Benji Davis, to help them. But this month, I share Cry, Heart, But Never Break by Glenn Ringtvet, illustrated by Charlotte Pardi (Enchanted Lion Book 2016, originally published in Denmark in 2001). Like The Forest written by Riccardo Bozzi, this story tells us death as a natural and inevitable part of life.

Ringtvet wrote this story to explain his mother’s dying to his young children. The story begins outside the “small snug house” where four children live with their beloved grandmother. They have a visitor – Death. Death as a character is often depicted as someone sinister who enjoys his job. However, in this book, we are met with someone unexpectedly tender. Not wanting to scare the children, Death, who has come for the old lady, has left his scythe by the door. In Pardi’s expressive and heartbreakingly crestfallen illustration, Death looks the entire time sorrowful and even broken by his mission. 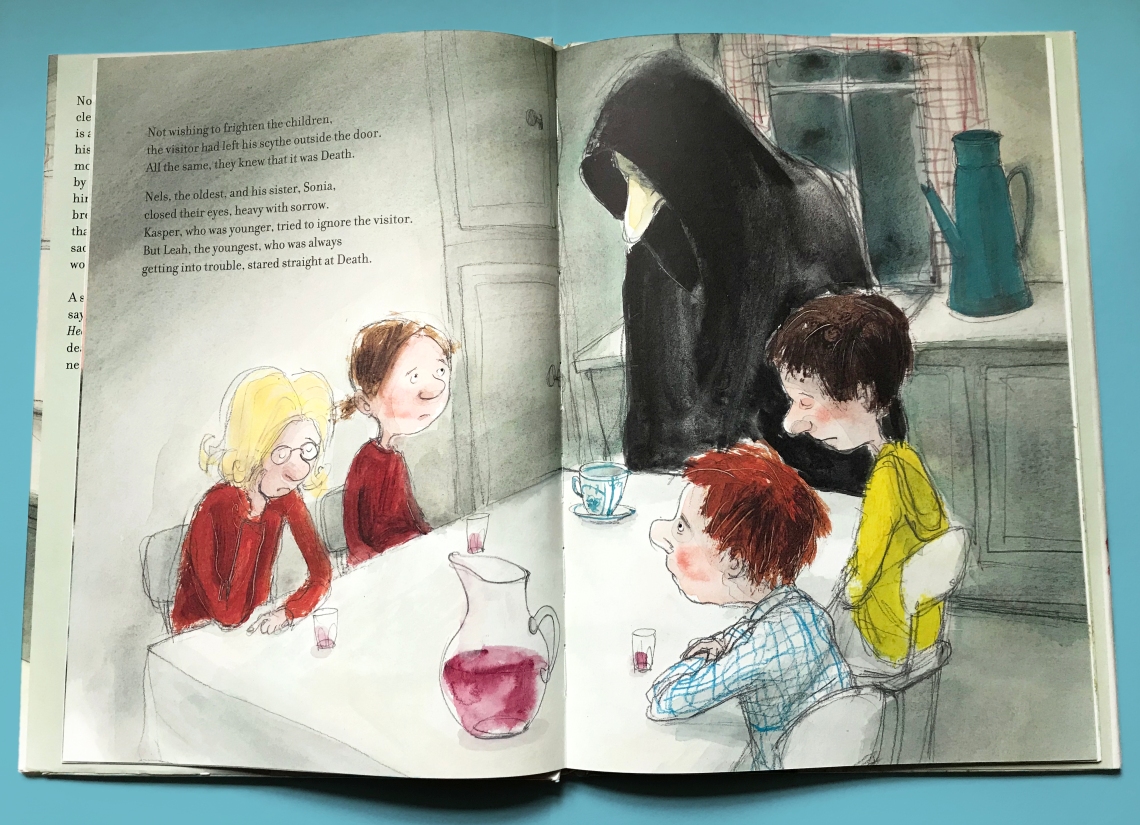 The four children know Death has come for their grandmother so they devise a plan. They keep offering Death coffee, believing that Death only works at night; when dawn comes, he would have to leave without their grandmother. Maybe Death is sympathetic to these children so he plays along, or maybe he is happy to putting off his horrible job as long as possible – he keeps accepting the refills.

However, time passes and Death tells them it’s time. Leah the youngest reaches out and takes his hand and asks why their grandmother has to die. To explain, Death tells them a story of two brothers named Sorrow and Grief, who lived miserably in a gloomy valley. At the top of those hills lived two sisters named Joy and Delight. Their days are full of happiness but they can’t help feeling that something is missing. One day the brothers and the sisters meet and fall in love. The two perfectly balanced couples – Sorrow and Joy, Grief and Delight – become inseparable. They get married and grow old together until they die on the same day as they couldn’t live without each other.

Death tells the children “It is the same with life and death… What would life be worth if there were no death? Who would enjoy the sun if it never rained? Who would yearn for the day if there were no night?” The children weren’t sure if they have understood Death fully but they accept the inevitability of death and let Death take their grandmother with him. When they hurry upstairs, where their grandmother has died, the scene is heartbreakingly gentle. Death says quietly, “Cry, Heart, but never break. Let your tears of grief and sadness help begin new life”. The Glenn Ringtvet’s profound message about death is so tender that gently sink into your heart. This is definitely one of the best ‘death books’.

My dad’s death didn’t break me. Thanks to my family and friends, I got it through and I also found comfort in creativity. People say what doesn’t break you makes you stronger. I don’t know if I’m stronger but I really hope so. Writing a picture book about death is on my bucket list. The truth is no matter how good the story is, nothing could prepare you for the real loss, but that is why many writers are compelled to try because it’s a near impossible challenge. But I guess it’s not that point. If I could share my experience through a book and it helps a kid going through his/her loss, I think my dad would be proud.

Here is a list of other wonderful books that help children grieve and make sense of death by Brain Pickings.