The other day I had a pleasure of having a glimpse into the life of scientists at the Natural History Museum. A friend of my friend happens to be a geologist who works at the NHM and he gave us a private backstage tour. He showed us around his office and lab, and told us about his research on rocks, lava and meteorites. Who knew rocks could be so fascinating!? I was also glad to learn more about one of my favourite museums in the world.

I admire people who are passionate about something and devoted to study and master the subjects. So this month I decided to share a biographical picture book about a scientist who also worked at the NHM – Joan Procter, Dragon Doctor: The Woman who Loved Reptiles, written by Patricia Valdez and illustrated by Felicita Sala (Andersen 2018).

In UK, this year marks the 100th anniversary of women’s suffrage so feminism is a hot topic even in the world of children’s books (Goodnight Stories for Rebel Girls and Little People, Big Dreams series to name a few). So there’s no surprise this book about the incredible female zoologist came out this year.

Joan Procter, born in 1897 in London, began collecting lizards and snakes as a kid while other girls played with dolls. When she grew older, she skipped the parties and dances with her friends. Instead, she visited a curator of reptiles and fish at the Natural History Museum. I will leave what happened next to you to read yourself, but this is an inspiring story about a woman who didn’t conform to what she was expected to be as a woman at the time and, instead, dedicated her life to what she was passionate about. As a result, she earned, not just the respect in the male-dominated science world, but also the trust of the reptiles she cared for. 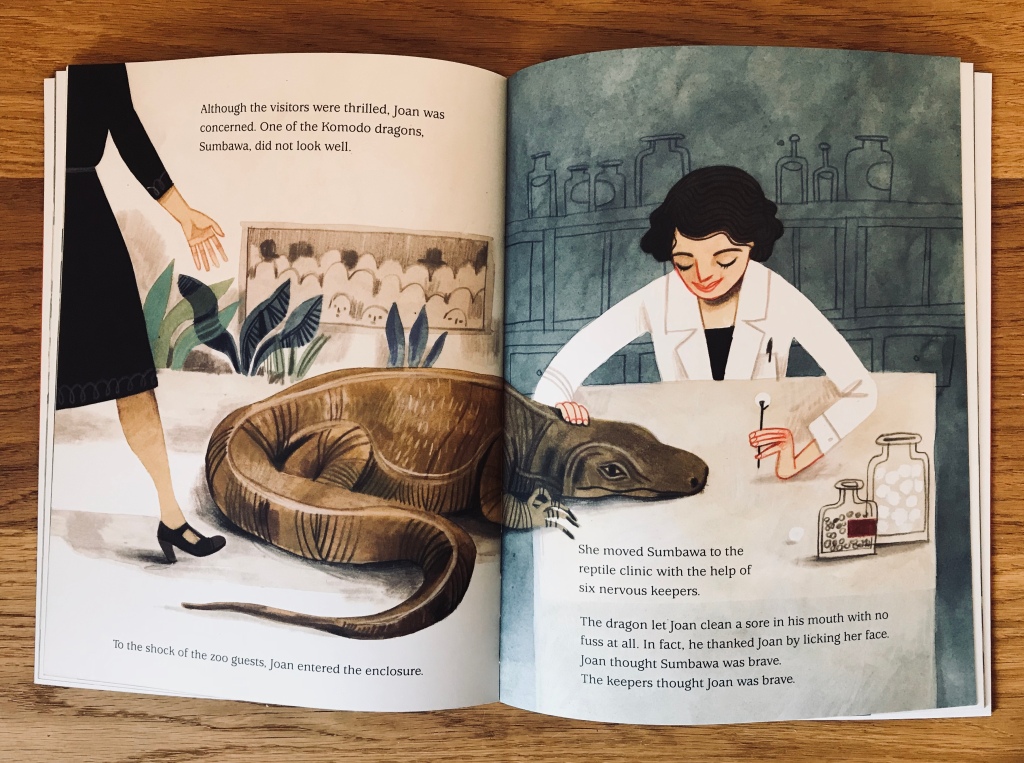 Although toned down on her hardships (her illness and her struggle as a woman), the story has many exciting and touching moments. It’s elegantly told by Patricia Valdez (she’s a scientist too!) and beautifully illustrated by Felicita Sala. My favourite spread is the one which a Komodo dragon bridges two scenes. Genius! I also love the spread which you see only people’s feet and half of the gigantic lizard. What a dramatic composition. This is a great example of ‘less is more’. Her major life events took places at the Natural History Museum and the London Zoo. It’s nice to learn a bit of history of those popular places in London.

Although this book could be categorised as a ‘feminist’ book, this isn’t just for girls. I’m sure this book fascinates boys too. It’s full of gorgeously illustrated reptiles (note: I’m not implying ‘dinosaurs for boys and princesses for girls’), and the heroine – who could be cooler than a woman who walked a real-life dragons!!